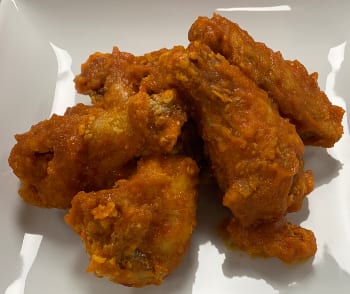 If you have a hankering for some sweet, sweet BBQ, Kitchen United Mix has tons of delicious options for you. With several local restaurants under one roof and quick online delivery, you can order takeout from the best BBQ places in Scottsdale from the comfort of home.

Aloha... these wings are doused in Doris’ famous garlic sauce. This sweet soy-garlic sesame sauce will be a crowd pleaser [...] 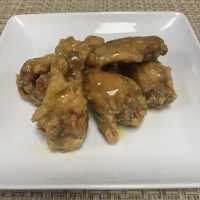 Inspired by Chinese takeaway style lemon chicken. This sauce is sweet and lemony (Mild). Served with a side of carrots and [...] Our take on the popular Chinese takeaway orange chicken. The sauce is sweet and tangy with a little bit of spice (Medium). [...] Try the BBQ wings smothered in Wing Wing Hello’s signature mild sauce. You can add a side of Thai curry, Japanese sushi, or a Saladworks creation to round out your meal. At Kitchen United Mix, anything goes. So curate your delivery to your heart’s content.

Wing Wing Hello offers a variety of options to keep your BBQ wings company. Along with the usual suspects, like buffalo and teriyaki wings, Wing Wing Hello also has adobo wings that showcase the Filipino flavor combination of garlic, soy sauce, vinegar, and cracked peppercorns.

Wing options like sriracha lime, spicy Korean (with a traditional gochujang based sauce), and orange chicken make it tough to settle on just one type.

Are you feeling brave? The Hello Reaper Wings take buffalo sauce to the next level with extra hot habanero chili sauce. Even the most fearless wing aficionados must beware!

The Wing Wing Hello menu has interesting sides as well. Spicy soybeans are a high-protein, flavorful snack of edamame with Shichimi Togarashi and sriracha.

French fries get an Asian twist with furikake (seaweed seasoning), or sauteed kimchi topping. Mac & cheese is also on the menu, served up Hawaiian-style with shredded carrots and spices.

Unlike other takeout delivery services in Scottsdale, Kitchen United Mix doesn’t require you to order food from one single restaurant.

By partnering with multiple businesses, Kitchen United Mix lets you customize your order however you want.

Order BBQ wings, noodles, salads, or ethnic dishes from a variety of great Scottsdale restaurants all at once.

You won’t find that kind of vast selection at a sitdown BBQ place. At Kitchen United Mix, barbecue is just one part of the super delicious mix.

What is Kitchen United Mix?

We’re a local kitchen center that contains multiple restaurants all focused on making food to go. We provide each restaurant with a fully licensed, dedicated kitchen so they can prepare fresh, delicious food. Everything is packaged for pickup or delivery.

Can You Place An Order Ahead?

Yes, you can place an order ahead here on our website. Order ahead from any of our 10+ great restaurants near Scottsdale.

Can You Pay Cash With Kitchen United Mix?

Currently we don’t accept cash. You can use cash when you want to tip your driver in person.

Parking in the lot for the strip mall we are inside of.